Through sleep, I feel breathe on my face, warm and salty, and a small tapping on the tip of my nose. “I want mommy hair”; my four year old son is saying, standing in front of me with his jaw slack, a paci suspended from his lower lip and tongue. I wave him into the bed and scoop him up, plopping him down between my husband and me. I fall back asleep with his little body fitted into the curve of my back, his head and hands buried in my hair. This happens a couple of times a week.

My son is obsessed with my hair. It started when I was breast feeding. After the pregnancy and birth, I was letting my hair grow out. Frequently, his chubby little hands would reach out for the growing strands as I’d tilt my head this way or that while nursing. It was subtle at first- my hair being one of the few things that could settle him in early infancy and into toddlerhood. Not planning to keep my hair long much past the post-partum blues, I found myself in a place where I was letting my son’s needs dictate what I did with my body, much like one does in pregnancy and during nursing.

And now at 4, what became a comforting gesture during his infancy has transformed into an all-out obsession, and I frequently find myself telling him, “I am not my hair.”

When I pick him up from school, he frequently runs over to me, reaches up and undoes my hair clip. Pulling a handful of hair to each of his cheeks, he rubs my hair on his face and inhales the scent. It has gotten to the point of such hilarity that my husband and I joke about our son’s potential to one day be a hair-fetish driven serial killer; his name is Dexter after all. For instance, one day, I am collecting his belongings from his cubby at school, he unfastens my hair and puts his nose into my scalp, and I hear an audible sniff, “Ah, mommy hair,” he says. My 12 year old daughter, mortified, tells her little brother he is creepy and stalks off, reminding him that she had me first.

And this is true, she did. She laid claim to my body right up until her brother was born, and she herself slipped into puberty. Even at seven, she would crawl into my lap and adjust my breasts like errant pillows and then rest her head with a sigh. As children, we seek love and comfort from our mother’s bodies. Even still, at my age, there are few things a hug from my mom can’t at least abate; her touch calms me.

Due to this bond we develop as children, a mother’s body has been and still is the subject of much poetry. While in graduate school, I was elbow deep in confessional poetry, reading works by Alicia Ostriker, Sharon Olds and, of course, Anne Sexton and Sylvia Plath. One day, I stumbled upon Marge Piercy, a Jewish-American poet who frequently writes the body. In the title poem of Piercy’s collection titled My Mother’s Body, she says:

The angel folded you up like laundry
your body thin as an empty dress.
Your Clothes were curtains
hanging on the window of what had
Been your flesh and now was glass.
(…)
This body is your body, ashes now
And roses, but alive in my eyes, my breasts,
My throat, my thighs. You run in me
A tang of salt in the creek waters of my blood,
(…) what you
did not dare in your life you dare in mine.

Also, in “What Remains” within the same collection, she writes, after receiving her mother’s ashes:

Now I hold what is left in my hands
bone bits, segments of the arched skull
varicolored stones of the body
green, copper, beige, black, purple
fragments of shells eroded by storm
That slowly color the beach.

In both excerpts, through examination of her mother’s body and confronting her mother’s mortality, she is forced to also confront her own mortality and the idea of life’s continuity and progression. As children, we feel a certain ownership over our mothers, not just their time and attention but also their physical selves. We find comfort in them, whether it be their scent, their touch, the feel of their skin; we gain a portion of understanding within ourselves in possessing them because as much as we fight (or embrace) it we will become them- “your body, ashes now,… but alive in my eyes, my breasts…”

For women and mothers, objectification is nothing new; however, the sexual objectification a woman experiences is so very different than that of a mother. As a woman, sexual objectification is often unwelcome, confusing and at times aggressive. I do not like it; I am uncomfortable with the reductive gaze and being reconfigured as a collection of parts. But, as mothers, the objectification we experience is more subtle and comes from a place of love and bonding. For example, with both of my children, when breastfeeding that first time, I knew that it was through that experience, where they were only aware of my breasts and perhaps my smell, in the physical sense, not even cognitively, I knew that is where the mother-child bond begins. Additionally, even if a woman chooses not to or cannot breastfeed, there is ample research that supports the fact that bonding with newborns is facilitated by skin to skin contact, not just with the mother but also the father. 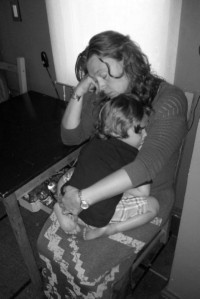 Additionally, as mothers, while we may embrace our children’s objectification and even that of our spouses, we can’t hinder the sexual objectification that we encounter and experience as sexual beings. Due to the hyper sexualization of the female form in modern society, we tend to shy away from the fact that biologically our bodies are composed in such a way to be physically appealing to the others. The female form is beautiful and meant to be appreciated.

For me, this duality- sexual being vs. mother- was, and still is, overwhelming and contradictory. While I loved my pregnant body, during both pregnancies, reveling in the roundness and curviness of it all, I was at war with my post-partum self- physically and emotionally. I remember going to my first post birth check-up after having my daughter and telling my doctor, “So this is what I am left with…,” motioning to my milk filled breasts and still swollen abdomen. At that same appointment, she told me I was clear to have intercourse, but it was okay and even understandable if I wanted to tell my spouse I needed a few more weeks. I was relieved. I no more wanted to have sex than I wanted a hole in my head.

I was so at odds with my physical self that I found the little fib comforting, as if I was in some way obligated to explain to someone else why my body was off limits at the time. But, sometimes as wives and mothers, we feel the need to perform and please. I was so torn between these feelings that around that time I wrote this poem, which appears in my poetry collection titled Stretched:

Her nose mashes into areola,
next to my index finger,
pulling back flesh
between her nose and a mole
that I didn’t know was there
until my husband-
first kissed it.

She wrests her mouth free,
satisfied,
tongue darting in and out.

His tinted sex,
scheduled rather than hot

They surround me,
gliding in and out of my nostrils—
intermingled—suckling,
suckled.

At the time, I had trouble dealing with the expectations placed upon my body as both a sexual being and a mother. It is difficult sometimes to embrace our whole selves after childbirth. And, an often added element to that complexity of feeling is the sexual objectification, from welcome and not so welcome sources, that we encounter even after motherhood. And so, in that duality, our bodies become these fallible and imperfect entities that we have even less control over than we did prior to and during pregnancy.

However, where once the pregnant and post-partum body was hidden or shied away from, culturally we are advancing, and these bodies are now being celebrated. For example, in something as seemingly simple as maternity fashion, the change is notable. When I was pregnant for my daughter over 13 years ago a great deal of what I had access to in terms of clothing was ill-fitting and, in my opinion, worked really hard at hiding the baby bump. But, when I was pregnant with my son just 5 years ago, many more designers and boutiques carried maternity clothing, there was more selection online and accentuating the bump was encouraged as a means of embracing one’s body. How far we have come…

To further demonstrate the acceptance and celebration of the female form, Jade Beal, a photographer in Arizona, started the “A Beautiful Body Project” where she takes real photos of real life women of all shapes, sizes and ages, without airbrushing, in various states of undress. Additionally, these photos are accompanied by blog posts where the women tell the story of their own bodies. Congruent to her “A Beautiful Body Project,” Beal has also published a book titled “The Bodies of Mothers” where she showcases the bodies of mothers with or without their children and/or spouses. Many of the photos are startlingly beautiful in their realness.

Our mother’s bodies, and by extension our own bodies, are beautiful and should be celebrated for all that they do and accomplish. I am not a Jessica Simpson fan; however, she recently appeared in a commercial for Weight Watchers where she delivers lines about all of the amazing things her body has and does do for her. I like that commercial. Propaganda or not, it reminds us that our bodies are beautiful, efficient entities that our children revel in and take solace from.

So, for now, my son is still obsessed with my hair, and I have embraced that. He will not be 4 forever and once he is done with my mane, I will lop it off and donate it to Locks of Love. But, in the meantime, I care for it; I exult in its beauty and look forward to the day I chop it all off…it was never really mine to begin with. And, as for my badges of motherhood: my stretch marks strewn about my body like so much litter, my caesarian scar a thin line, a faded ridged silkiness; I embrace them too because they tell the story of where I have been and what I have given and taken as a mother but also as a daughter.

In the words of Anne Sexton to her own daughter Joyce, “I made you to find me.”